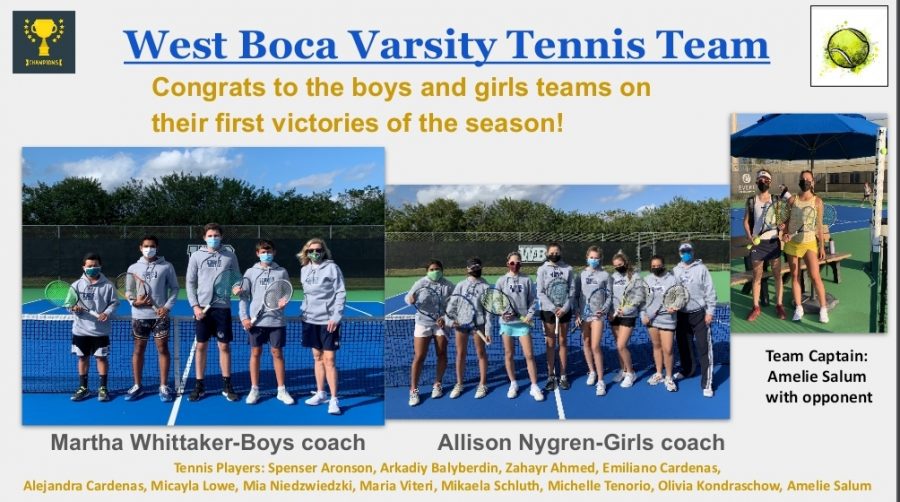 West Boca’s boys and girls tennis teams have gotten off to a rapid starts. In their first match of the season, West Boca hosted Boca Raton in our first home match of the season yesterday. The boys team was victorious winning four of the seven matches. Freshman Archie Balyberdin and sophomore Zahayr Ahmed won both their doubles match and singles matches and freshman Spenser Aronson also won his singles match.

The girls tennis team battled it out on our courts, but were not able to come away with a team victory. They did win two matches, however, both of which included team captain Amelie Salum who defeated her singles opponent and with her partner, Michelle Tenorio, played the most competitive match of the day beating their opponents by the score of 10-8 in a tiebreaker.

Both teams followed up their opening performances in a great fashion. West Boca tennis teams traveled to Olympic Heights yesterday and came away victorious.

The boys team won four of the seven matches. Archie Balyberdin and Zahayr Ahmed won both their doubles match and singles matches and Spenser Aronson won his singles match.

The girls tennis team got their first team victory, winning four of the seven matches. Mia Niedzwiedzki fought hard in her singles match, but lost in the tiebreak (11-9). Amelie Salum and Michelle Tenorio won both their doubles match and singles matches and Micayla Lowe won her singles match.

Congratulations to both the boys and girls on their strong start to the 2021 season! Go Bulls!