The West Boca Bullseye • May 14, 2021 • https://wbhsbullseye.com/2410/features/key-club-attends-a-different-convention/ 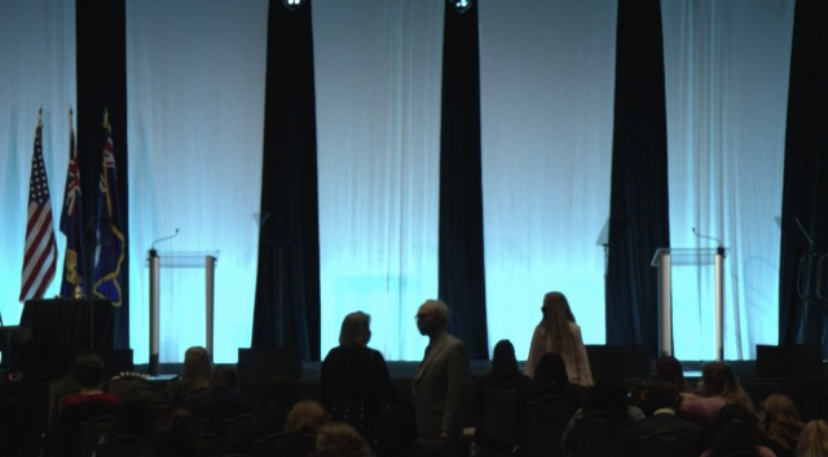 In the past month, Kaitlyn Berg, Grace Nelson, Sydney Davis, Madison Ginsberg, and Elan Loewinger from West Boca High School’s Key Club attended the annual DCON event virtually based in Orlando, Florida. DCON stands for “District Convention” where annually groups of Key Club members from different regions around the state of Florida join together for a district conference. Many students from numerous schools and districts took part in this educational event both in person and virtually.

The convention began on Thursday the eighth of April in which those who sought spots at the live event arrived. Following the arrival of students and advisors, the “Opening Session” began and those who attended the event virtually joined.

Personally, I went into this event very unclear as a new Key Club member. My goal was to learn some new information about the club and seek advice regarding leadership and future goals or community service opportunities. This convention went far beyond my expectations and kept me accountable for my involvement in both the event and my home club as well.

After speaking with Kaitlyn Berg, one of the Presidents for the 2021-2022 school year at the convention she had stated that she learned “about the true nature of being a leader along with honing in on my public speaking skills.” That being said Kaitlyn is super excited to carry on the message of Key Club in the following year as President. Grace Nelson, one of the future secretaries for the upcoming school year, added that she “really enjoyed DCON and the connections I was able to make with other Key Club members across the state.” Likewise to Kaitlyn, Grace can’t wait for the upcoming school year and hopes to see more students involved in this serviceable club for years to follow.

This event required a very formal dress code for the live audience, meaning business attire. Attendees appeared in blazer vests and suits ready for the long-awaited weekend. This event’s objective was to focus directly on the future leaders of America and directly concentrated on the community involvement aspect of leadership positions.

Following Thursday night’s opening session came Friday morning’s “Caucusing Sessions.” This meeting brought together all of the Key Club attendees in which candidates around the state of Florida ran for District Governor, District Treasurer, International Trustee, and International President. In order for these candidates to apply for their positions, they were required to make a speech in front of the entirety of the Key Club attendees. They were then drilled with a Q and A session in which questions were composed of member’s thoughts regarding their credentials to fulfill that position.

Ben Zapson, a Key Club member from Olympic Heights High School, right in our community, ran for District Treasurer. After close questioning and an in-depth analysis of his goals, Zapson won this position, making it his second year in a row as District Treasurer. Zapson previously took on the role of district treasurer in his Freshman year of high school during which he started an online store selling Key Club merchandise. He designed multiple shirts and sweatshirts and after being asked why he took on this challenge he stated that he loves Key Club for “The service that we do and the people that we meet”. Zapson continued to share that as District Treasurer he “met dozens, maybe even hundreds of amazing people”. Zapson believes that when you make a commitment to something it is not worth doing unless you give your all.

The event concluded Saturday afternoon with multiple zoom workshops. Attendees had options of taking workshops focused on overcoming stress, fundraising, leadership, public speaking, college tips and so much more. These workshops allowed for a more one-on-one relationship between both the attendees and counselors.

This year’s 2020-2021 Key Club DCON event was definitely not like past years, but it ultimately did its job in growing its community of Key Club members. It was an amazing experience to be involved in such an active community of young leaders. With the help of Key Club, community service will continue to become more and more widespread. It is always encouraged to step out of your comfort zone and try something new and while you’re at it do something to help your community!