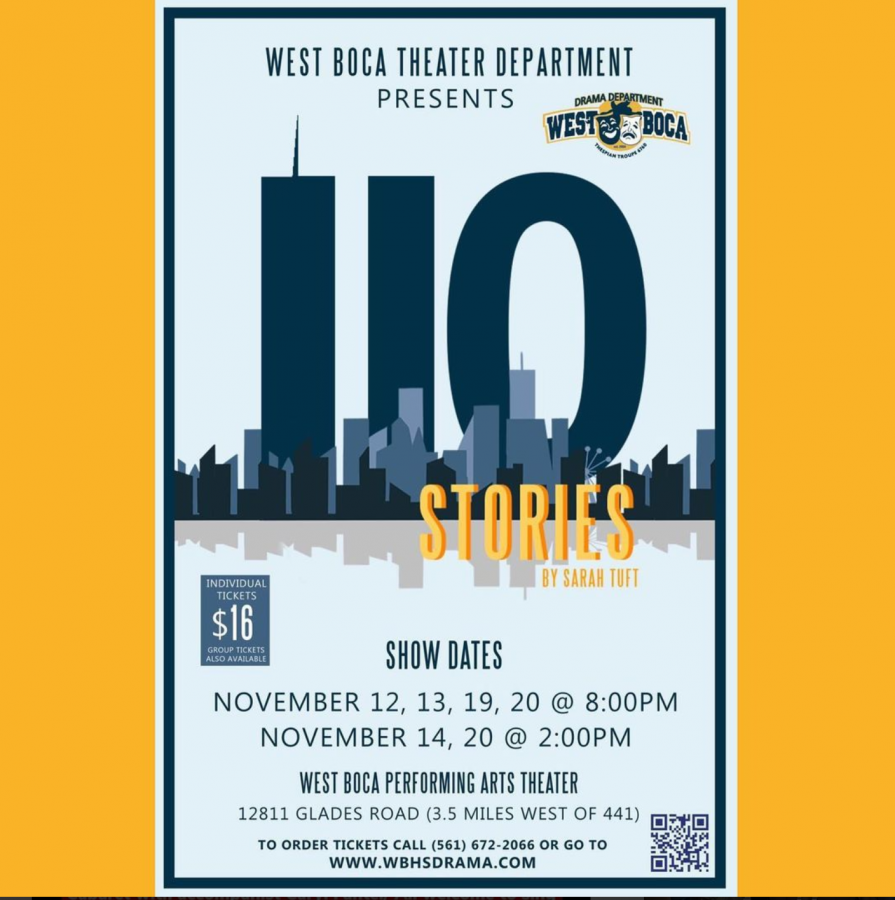 September 11th, 2021 marked the 20 year anniversary of 9-11. As many spent the day commemorating the thousands of innocent lives that were lost that day, West Boca Theatre Department established their fall show as one to remember.

Lance Blank, head of the department and Director, decided upon a show entitled 110 Stories, a play that takes on the personal, first-hand accounts of those who were impacted directly by the 2001 terrorist attacks. Contrary to many other shows the West Boca Theatre Department has produced, 110 stories contain a 13 person cast that takes the audience through a whirlwind of emotions. The play describes the 13 different perspectives of those that walked away from that day as very different people. Mothers, businessmen, officers, homeless men, and women tell their stories of what they encountered on September 11, 2001.

These students have worked incredibly hard these past few weeks to put together such a moving and monumental show. It’s so important to learn about what happened that day and why every year we must take a moment to recognize the lives that were lost. We need to remember the many firefighters, police officers, and others that walked into the buildings searching for those to help.

To this day family members continue to look back on those memories that they had with the lives of the people that were lost. Mrs. Rosenblum, West Boca High School’s English and journalism teacher, shares that she had lost her Brother-in-law, Joshua Rosenblum, in the September 11th terrorist attacks. Joshua was 28 years old and worked on the 104th floor of the North Tower for Cantor Fitzgerald. Although Joshua worked in New York City he lived in Hoboken, New Jersey with his Fiancee at the time. Mrs.Rosenblum shares, “Josh was the best! He lived an entire lifetime in his 28 years. He was athletic and so much fun. If he had survived he would have had 9 nieces and nephews (the oldest was 6 when he died.)” Stories like Josh’s are just one of the thousands who touched so many lives with his strength and courage.  By telling the stories of 9-11 it is encouraged to never let the memories fade. These people may be gone, but their stories will continue to be heard whether that be in this lifetime or the next.

Tickets to come to see 110 stories can be found on wbhsdrama.com. Use code “student” at checkout to receive a $5 student entrance ticket. For more information check out wbhsdrama.com!