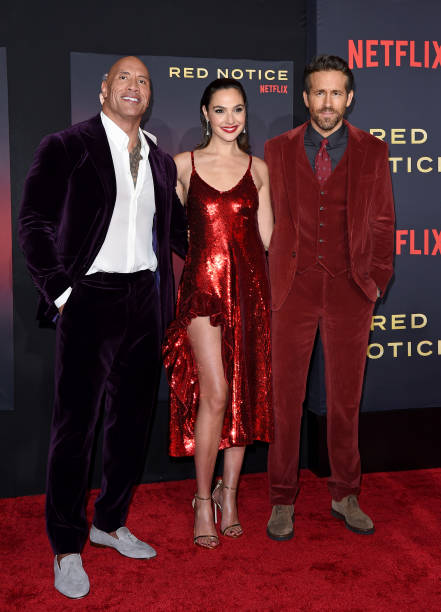 The movie Red Notice starring Dwayne Johnson, Gal Gadot, Ryan Reynolds, perfectly balances action and comedy. With Gal Gadot as the antagonist, the rock as the muscle, and Ryan Reynolds as the comedic relief, their dynamics take the movie from alright to brilliant. The movie is about an art thief, Nolan Booth, attempting to steal Cleopatra’s precious eggs. There are only three eggs in the entire world, and Mr. Booth’s goal is to steal them all. Unfortunately for him, he is not the only one who wants those eggs. The bishop, Gal Gadot, is known as the world’s greatest art thief and is determined to maintain that position.

During Mr. Booth’s attempt at stealing the first egg, he gets stopped by special agent John Hartley, who, after a wild chase, manages to arrest him and retrieve the egg. After Mr. Booth is behind bars, they find out that the egg they retrieved is a fake, Mr. Hartley then gets accused of stealing the real egg, and his partner locks him up with Mr.Booth. During their time in prison, Mr. Booth’s sarcasm and Mr. Hartley’s urgentness created a friendship as they teamed up to break out and find the second and third egg with the bishop on their tail.

The movie switches settings multiple times as it moves along, which genuinely adds to the storyline and gives it a pizzaz. All of the actors are phenomenal and can capture their audience and hold on to their attention throughout the entire movie. The comedy mixed in with the action and unpredictable plot twists further adds to the plot and makes it iconic.

Director Rawson Marshall Thurber collaborates with Dwayne Johnson for the third time in Red Notice. Co-starring alongside Johnson is Ryan Reynolds from Deadpool and Gal Gadot from Wonder Woman. Released on Netflix this year, Red Notice tells the story of an FBI agent and a thief being forced to team up to find three ancient eggs and take down the bishop, who is the greatest art thief in the world.

While Gadot may be talented in films like Wonder Woman, her performance in Red Notice leaves a lot to be desired. She does not make a good villain. Gadot lacks an intimidating presence, and comes across more patronizing rather than scary, which isn’t necessarily a bad thing, but with a film that carries two bumbling leads, a villain who could stand their ground could work in the movie’s favor.

Another flaw in Red Notice is the action. While containing impressive stunt work, the action tragically suffers from an extreme loss of tension. What makes action so engaging in movies like Die Hard, Mad Max: Fury Road, and more, is the fear of the hero actually losing the battle against evil. In Red Notice, there is no sense of fear that our heroes may get the short end of the stick, for nearly every opposing force is miserably incompetent at their jobs. Without tension, action is meaningless.

Despite its intriguing ideas, a major flaw to be found in the film is its story. While watching the film, you can find many little plot holes and inconveniences that diminish the film’s narrative. The movie also throws many twists and turns, all which feel unearned and lazy. When you drop a bombshell on your audience, you should leave them in shock, not rolling their eyes.

Another factor in why the action lacks is also another problem I have with the movie – the characters. Characters are what make your movie special. You can have a fun, smart, and unique story to tell, but unless the audience isn’t hooked by your characters, that story is meaningless. Red Notice suffers from this problem, having the audience follow two unmemorable characters they have already seen many times before, played by the same actors. Ryan Reynolds plays smart, loudmouth Ryan Reynolds and Dwayne Johnson plays tough Dwayne Johnson, as usual.

Overall, Red Notice is a deeply flawed film that could and should have been better than the end product. For any fans of the leads, or anyone who loves Netflix with a passion, give it a shot. Otherwise, stay away from it.

But what did you think of Red Notice? Tell us below!

For those concerned, Red Notice is rated PG-13 for language, sexual jokes, and violence.