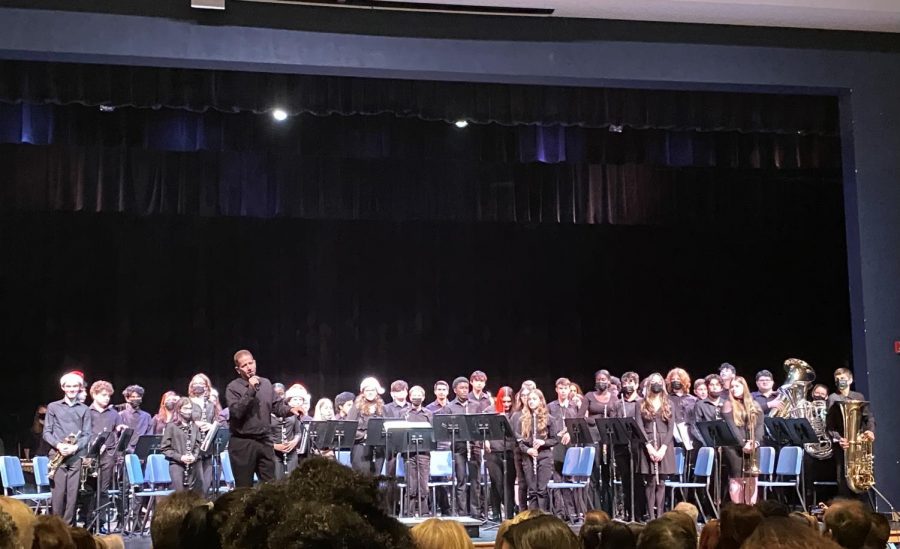 The West Boca Vanguard performing during their Winter Band Concert

On Tuesday evening, December 7, 2021, West Boca High School held their Winter Band Concert in the auditorium.  Wearing an all black attire, sprinkled with the red and white of Santa hats worn by several of the members, and led by the professional and very personable WBHS Band Director, Mr. Larry Shane, the band looked sharp, festive, and ready to perform. The audience knew they were in for a great treat, and the band did not disappoint!

Leading off the show was the Percussion Ensemble who performed the “Carol of the Bells”. Seeing all of the  wooden xylophones set up in a variety of sizes and styles on the stage before the performance even began was impressive in and of itself.  However, when the Ensemble began to play, it became apparent why they have won so many awards for their performances.  The way that the performers were able to use their mallets to  create such  beautiful rhythm while constantly varying the intensity of their sound throughout the piece was wonderful. It was truly exciting to watch and was a great way to get the audience engaged and excited for what was to come next.

Following the Percussion Ensemble was the Concert Band who played four different songs. This group was made up of mostly 9th and 10th graders who performed their pieces very confidently and professionally.  They ended their set with “Deck the Halls with Old Composers” which created a nice holiday atmosphere in the auditorium as it mixed the Christmas song “Deck the Halls” in with parts of other classic songs by various composers.

The final group to perform was the Wind Ensemble which featured predominantly upperclassmen,  and their experience showed.  Clearly the most seasoned of the groups performing for the night, this Ensemble performed their five pieces of the night flawlessly.  Their first piece was called “One Life Beautiful” and was a beautifully performed tribute  dedicated to the memory of  2016 WBHS alumna, Melanie Mouat whose life was tragically cut short in a car accident. After that, the ensemble performed an overture, and Chanukah and Christmas pieces.  Throughout each piece, it was exciting to hear many of the various instrument groups performing solo and group performances featuring the likes of the flutes, trumpets, piccolo, and the contrabass clarinet.

Throughout the evening, it was great to learn that many of the performers performed in multiple ensembles and played various instruments as well. The highlight of the night, however,  was clearly the last piece that was performed by the Wind Ensemble entitled, “ The Final Day (and the Beginning)” which was written by Band Captain and WBHS Class of 2022, Jacques Yarris, who is an inspiring composer. This was the first performance of the piece in front of a live audience and it was performed brilliantly! Hard to believe that a high school senior could compose a piece like that! Clearly, Yarris has a bright future ahead as a composer.

Overall, the 2021 Winter Band Concert was a great success and a very fun and festive night that was enjoyed by all!

The bands will perform next at District Music Performance Assessments (MPA) in March. They are currently running their annual gift wrapping fundraiser at Bed Bath & Beyond and Burlington through Christmas Eve. Come on out to support our West Boca Bulls!